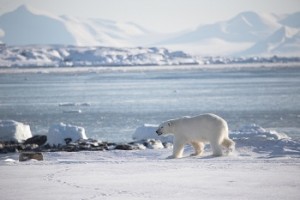 How do you feel about taking a wildlife safari cruise in the land of the midnight sun? With sea eagles swooping overhead and a very real chance of spotting a polar bear in its natural habitat, youll experience a landscape that appears inhospitable at first glance, but is actually teeming with a huge variety of species. Arctic hares, foxes and even wolves leap across the land. In the sea below, youre likely to see whales, porpoises and seals. All the while, northern fulmars; a type of sea bird, follow the luxury cruise ship from which youll be exploring the mysterious Arctic region.

Hurtigruten is a tour operator which has specialised in providing luxury cruises through the icebergs of the far and frozen North for many years and is a safe pair of hands to steer you through the ice. Your route will depend on the ice conditions, but this unknown element to your journey only adds an exciting dimension to your exploration.

Youll visit a number of destinations during your safari. One is the North West Spitsbergen National Park. This mountainous area is about as far North as you can sail before you reach land. It was named after the very sharp, steep peaks and has some incredibly dramatic sights. Weather permitting, your Captain will navigate toward the Kongsfjorden or Kings Bay which is the largest fjord in the area, passing enormous glaciers along the way which are slipping into the sea. There will be plenty of sea birds overhead.Given the roughness of the terrain in this region, be prepared for the hikes youll be offered todemand a certain level of fitness, but of course, if youd prefer to relax and watch the animals fromthe sun deck of the boat, youre more than welcome to do that.

Next, at the North East Greenland National Park, youll be encouraged to keep a lookout for polar bears. Thats right, youll have the chance of seeing a polar bear in the wild! The brown creatures that youll see everywhere are musk oxen.Its worth pointing out that Hurtigruten are much more than just a trusted travel operator to the far North, they also provide a lifeline for some of the more remote areas, such as the settlements close to the national parks. You will get the chance to meet the locals when the boat drops off their post and supplies and get a taste of how it feels to live in such remote land, under a sky which is lit up by the most extraordinary colours, when a spectacular phenomenon occurs, known as the Northern Lights.

Aspen Travel has worked with Hurtigruten for many years and knows all about the incredibly unique experiences they offer. If you want to take a dog sled across the frozen tundra, or chase the Aurora Borealis as it dances in the sky, please give our team a call. Theyll be able to advise you as to when the cruises are running, as well as provide you with the best possible deals.