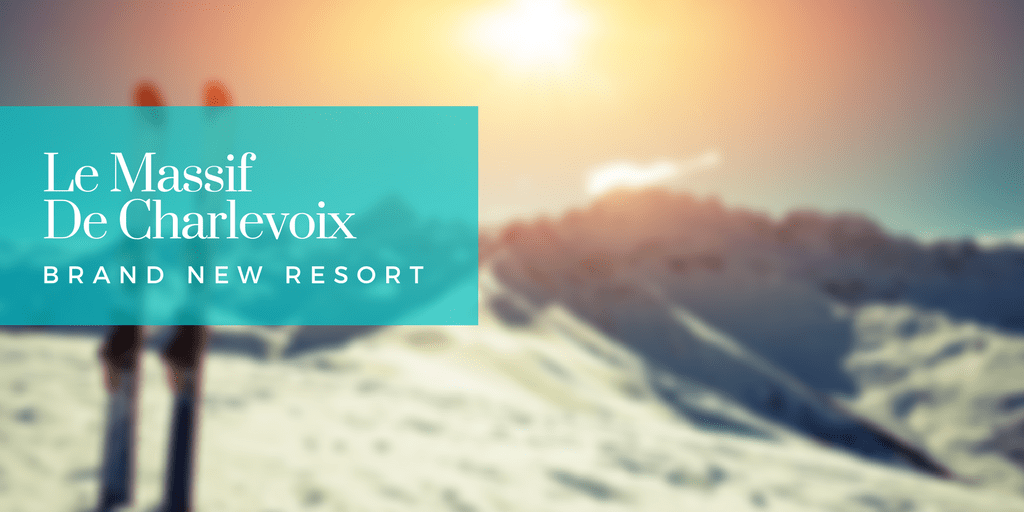 Fanfare please! Club Med has just announced plans for its latest ski resort; Club Med Le Massif de Charlevoix. This exciting new development will be Club Med’s first North American ski resort! Given the fact that Club Med is leading the way in European ski resorts, with 24 already established in France, Italy and Switzerland, not to mention their breaking into the Asian ski market with a flourish, having set up new resorts in China and Japan, it’s certain we can expect great things!

The Club Med Le Massif De Charlevoix will be located in the Le Massif ski area of the Laurentian mountains in Charlevoix. This area of outstanding natural beauty in Quebec province, towards the east coast of Canada, was named a world biosphere reserve by UNESCO in 1989. From the tops of the slopes you’ll see the Saint Lawrence River flowing down below, but skiing wont be the only attraction here.

Through extensive research into people who visit their resorts time and time again, Club Med have come to understand that at least one member of each group will be looking for daytime mountain entertainment that doesn’t involve skiing. It’s for this reason all of their resorts provide leisure activities to suit a number of preferences. This is why as well as skiing at a Club Med resort, you’ll also be able to use the spa, access the gym, or enjoy snowshoe walking through the impressive frozen landscape.

There may even be a collaboration with Cirque du Soleil, as with at recent Club Med refurbishments at their Opio En Provence resort, to provide a ‘creactive’ space, where adults and children alike can have fun learning circus skills, when they fancy a bit of downtime away from the piste.

Club Med Le Massif de Charlevoix will be built with 300 rooms; catering for families with children, groups and couples alike. On site business facilities will ensure that you can be in touch with the office should you need to be and multilingual staff will be on hand to help you access everything included in your package, such as lift passes, equipment and tuition to suit every level of expertise. Additionally, there will be a 5 trident space within the accommodation to provide heightened luxury to those who wish to enjoy an enhanced level of customer service and more sizeable private quarters.

Essentially Club Med are bringing their uber successful European mountain resort model to Canada, but making it bigger and better than ever before. Club Med Le Massif de Charlevoix will have kids’ clubs to entertain all age groups, activities to suit different seasons and high quality cuisine that caters for every taste, including those who wish to try regional specialities.

About the Le Massif ski area in Charlevoix

There are approximately 406 acres of skiable area in the region. 3 peaks overlooking the Saint Lawrence River with the highest summit reaching up to 2,644 feet provide runs suitable for those who have yet to set foot on the slopes, intermediate level skiers, experts and cross country enthusiasts. There are 6 lifts and the slopes can be accessed by both the base and the summits of the mountains.

As the site of the Junior World Ski Championships in 2006 and 2013, this area is not only where the alpine training centre for Canadian athletes is housed, but is also home to a 7.5km sled run. Packed with twists and turns, the minimum age is 10 and everyone is expected to wear a helmet. The exhilaration is paused in the middle for you to have a drink and a snack! It makes for a great day out!

You’ll have access to morning and afternoon ski tuition sessions, during which your professional coach will bring you onto your next stage of development; whether that’s standing upright without falling over, or cruising down a black run with one leg in the air! Don’t be intimidated by the seasoned skiers because you’ll be placed in a group of similar ability and encouraged to simply get the most out your lesson, whilst having fun…and there’s a lot of fun to be had at Le Massif!

The ski season runs from December to April, but if you don’t fancy your chances on the slopes, or you prefer a bit more sunshine on your holiday, you could always consider visiting this luxury mountain resort outside of the ski season. The mountain scenery is breathtaking all year round and you’re only a short drive away from some very exciting attractions and places of interest. 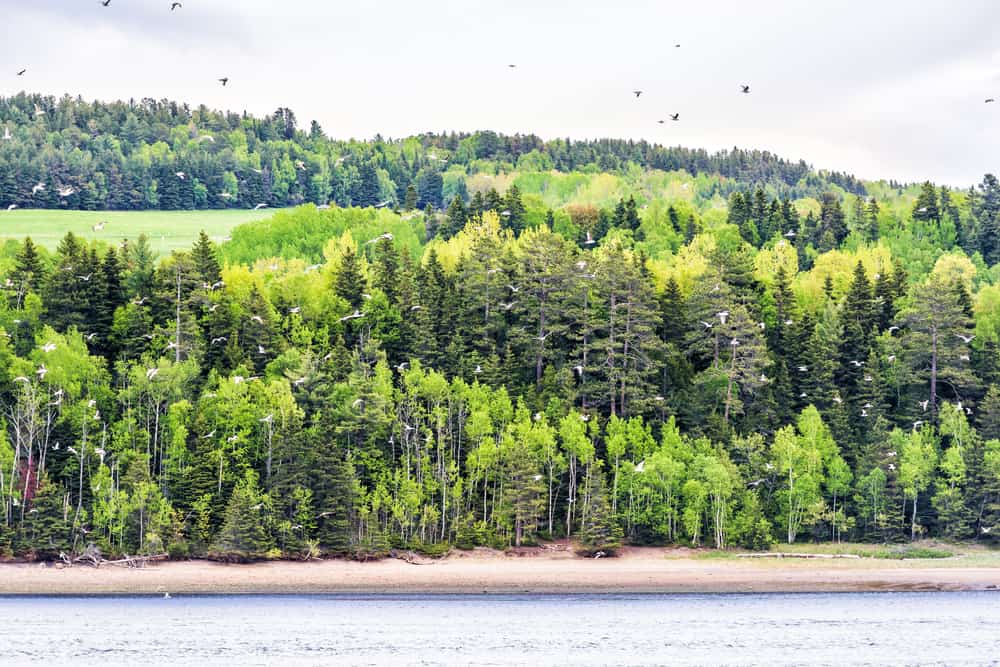 If you wanted a break-away from Ski at Club Med Le Massif De Charlevoix, you can Explore the local roads of Charlevoix. Situated on the banks of the Saint Lawrence River in an area famed for its fjords, bays and headlands, there’s some beautiful landscapes to explore. One of the must-see parts of the Biosphere are the steep valleys and tall cliffs of the National Park; Hautes-Gorges-de-la-Rivire Malbaie. The views through the elms and sugar maples are simply stunning.

If you’re interested in wildlife, there’s a good chance you could spot caribou, cougars and wolves here. However, one of the biggest mammalian attractions is under the water. Take a boat trip from Tadoussac; a port located on the Saguenay River, which feeds into the Saint Lawrence River and you could be watching Beluga whales, Greenland sharks and even the mightiest of them all; blue whales!

Also well worth a visit is Coudres Island, located in the Saint Lawrence River; an island municipality filled with windmills, hazelnut trees and local crafts, as well as the arty city of Baie Saint Paul, which is where Cirque du Soleil was founded and home to many upmarket art galleries, shops and restaurants.

If you’re around between May and September, and a music fan, you’ll enjoy the myriad of concerts that take place at the Salle Francois- Bernier venue, as part of the Le Domaine Forget international music festival. The music is predominantly classical and jazz with big names in these two scenes from around the world turning up to play.

Of course, you’re not far from Quebec City either. It’s just an hour away. If you can cope with a long drive, you could even attempt a couple of days in Montreal, but that’ll set you back another 3 hours drive each way. 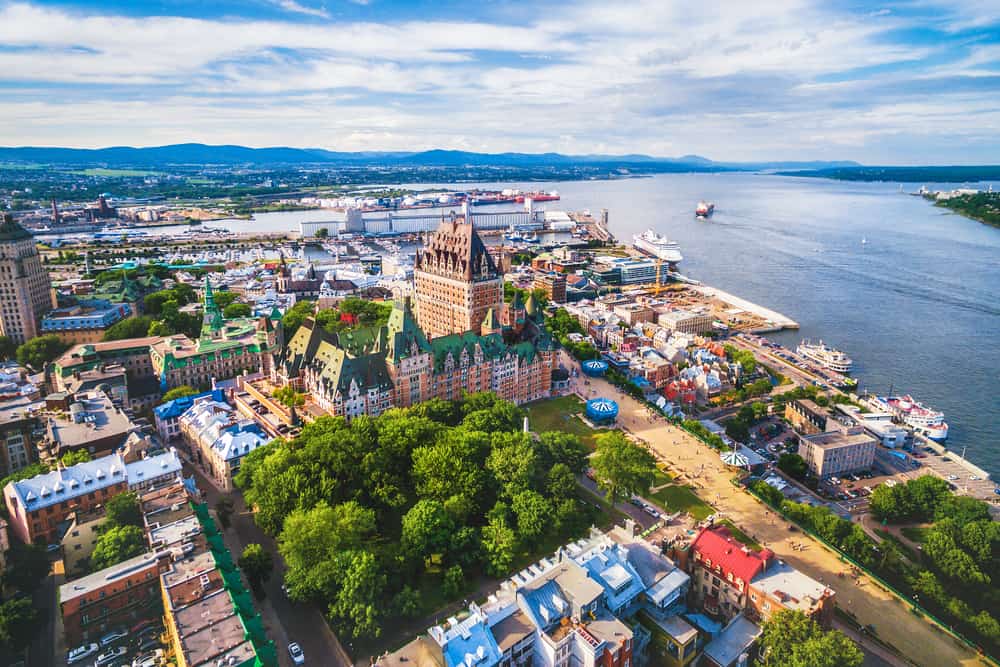 Quebec City is one of the oldest cities in North America and the oldest French speaking community here too. It strongly identifies with its European roots, which is reflected in the cuisine, pavement cafes and distinctive old European style of the architecture.

One of the most popular attractions of the city is Le Chateau Frontenac, which is a major shape in the city skyline and one of the most photographed hotels in the world. When you see it in the flesh it’s easy to why. With its grandeur and turrets, it’s very impressive.

Next is La Citadelle. Its a military building that still functions as one, but is also an official residence of the Canadian monarchy. You can see soldiers marching in formation here and take a tour of the state rooms. Also worth a visit is the Museum of fine arts, which houses a mixture of contemporary art and local art dating back to the 18th century, as well as the Museum of Civilization, which hosts exciting temporary exhibitions and has a discovery zone for the kids. 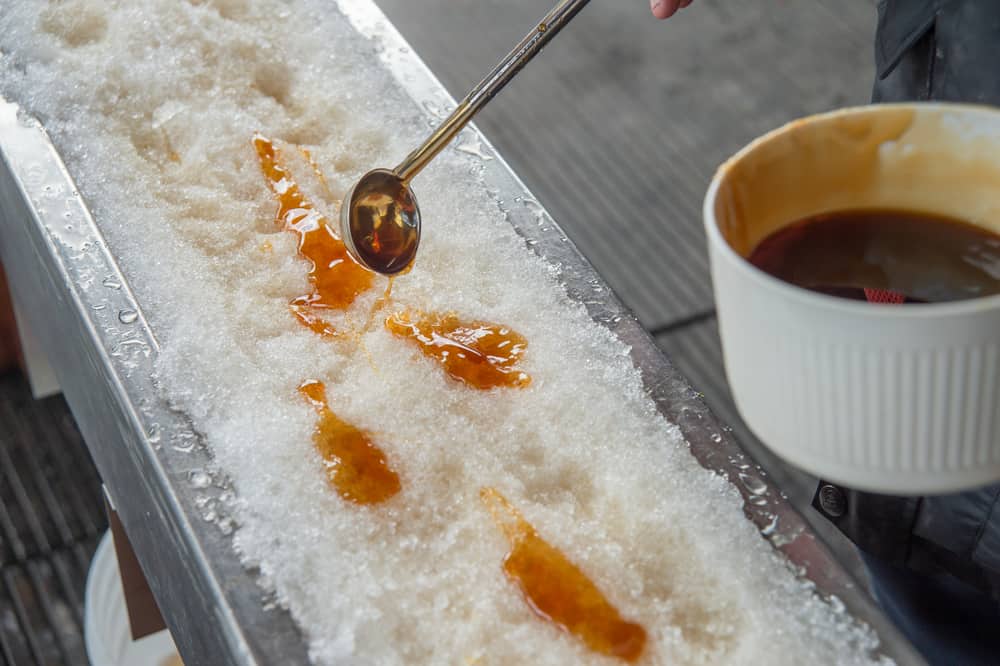 When you stay at a Club Med resort, you can be assured that you’ll eat well. Food will be available as part of your package throughout the day and evening. Most resorts have one restaurant which offers buffet-style dining with an international flavour, as well as a venue that offers more regional cuisine, usually served to your table.

The food in this part Canada is influenced by French cookery, as we’ve already mentioned, but also due to the cold temperatures in the winter months here, the food tends to be hearty, warming and filling; a perfect menu after a long day on the slopes!

Favourite Quebec dishes include poutine, which is chips covered in cheese curd and gravy, cretons ; a sort of pork spread eaten with bread at breakfast time, meat stews and pies, as well as beans with added maple syrup. In fact, just about everything seems to go with maple syrup here!

Are you as excited about the prospect of Club Med Le Massif de Charlevoix as we are? Having worked closely with Club Med for many years, we are aware of just how impressive each new offering tends to be. You can place pre-orders with us, or if we’ve whetted your appetite for some Club Med fun before this new Canadian resort is built, why not give us a call to find out more about their 80+ plus other resorts spread around the globe?

Aspen Travel is a respected travel partner of Club Med and can get you the very best deals. Give us a call, or send us an email to discover a whole world of competitively priced luxury all-inclusive package holidays.