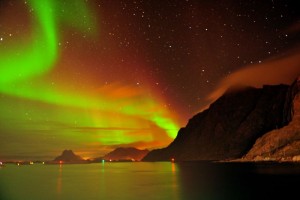 In June 2014, NASA confirmed that the Suns polarity had flipped. This all sounds very dramatic, but please dont worry because it happens approximately every 11 years and heralds the peak of the current Solar Cycle – in this case No.24 – and what is known as Solar Maximum. Solar Maximum is the term used to describe the period when the Sun is at its most active and, as a consequence, the Northern Lights are at their most frequent and spectacular.

You might be forgiven therefore, for thinking that you have missed the best of the Aurora Borealis until the next peak but fortunately, nothing could be further from the truth.

Research by the experts (really, really clever people) who sit on the NOAA/NASA Solar Cycle Prediction Panel suggests that major solar events are more likely to occur when a Solar Cycle begins to decline i.e. after Solar Maximum. Consequently, they are anticipating some highly significant solar activity as we begin the slow decline to Solar Minimum.

Whilst this current Solar Cycle has not been as lively as originally expected, we have experienced numerous wonderful Auroras during the last two to three years and if the Solar Cycle Prediction Panel is correct then even more impressive Northern Lights are on the way.

Essentially, Solar Maximum is only half over and the second half, very possibly the best half, is yet to come. Our recommendation is to head to The Aurora Zone sometime between now and winter 2016. Autumn is a great time to travel if you want to avoid the colder winter months but the arrival of snow and snow-related activities makes November to late-March a compelling proposition too.

There is one other thing to remember: The next Solar Maximum may not occur until 2025……are you really prepared to wait that long?