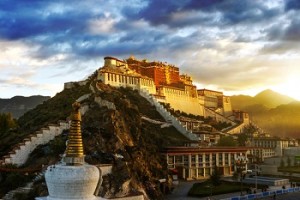 An escorted tour is the best way to get a feel for the highlights of this incredible country and what better place to start, than the birthplace of modern Tibet, known as Tsetang. Here you’ll visit the Yumbulagang Palace, the former residence of the first king of Tibet and the Trunduk monastery. You also see beautiful pearl encrusted objet d’arts including one which is decorated with £29,026 pearls! Lijiang has a rustic charm of its very own. Walk along the cobbled streets and you’ll see wooden traditional buildings, stone bridges and the beautiful black dragon pool, which is resplendent with wildlife and has inspired a lot of art. It is Lhasa which is probably the biggest name in Tibetan towns. Located higher up a mountain, youre advised not to rush up the steps that lead to the main attraction here the Potala Palace, as you may struggle to catch your breath. It takes a bit of time to get used to
spending your days at such a high altitude, but once you do, you’ll be able to wander around marvelling at the pilgrims and traditionally dressed folk who flock here and live here respectively. The Jokhang Temple is what attracts many and you’re sure to see people praying here, however, also well worth a look, is the house of the Panchen Lama with it thousands of treasure filled rooms. The Panchen Lama holds the second highest title after the Dalai Lama.

In such a scenic, hilly region, it’s inevitable that youll want to explore surrounding mountains and gorges. The view from Jade Dragon Snow Mountain, which stands proudly at 5500m is one of the finest in Tibet, looking out, as it does, over Tiger Leaping Gorge. If famously high mountains hold more appeal for you, however, you will enjoy a trip to the Mount Everest base camp in the Himalayas. Everest is one of the worlds highest mountains and the camp is used by serious mountain climbers as they may they make their way up and down the sheer mountain face.

Tibet is full of beautiful, ornate pagodas and monasteries, each with its own individual style and finish. The three pagodas of Dali are hard to miss given that they make a distinctive shape in the town skyline. You might have heard of the Songzanlin monastery in Zhongdian town, which was christened Shangri-La in the literature it inspired. You might not have heard of the Sera monastery in Lhasa, but this is equally important given that it is regarded as the seat of Buddhist learning and has provided the setting for many Buddhist debates. If you’d like to cruise on Erhai Lake and see how traditional tie dye is done, then we can help you gain a completely original and memorable trip to one of the most fascinating places on
Earth. Please give our Aspen Travel team a call and well be able to advise you about the best packages they have available, as well as any current deals.